TO NOURISH and INSPIRE MIND, BODY, HEART and SOUL   +61 (0) 487 496 171
+61 (0) 487 496 171
EVENT POSTPONED (as of 13th March 2020)
​Dear friends, we have just received notification from His Eminence Ling Rinpoche that the proposed 2020 Australian visit has been cancelled.  Below is the letter from His Eminence secretary. Refund will be issued to those who have paid.
Kind regards, Tenzin Choegyal and Chris Hooper

About His Eminence the 7th Kyabje Yongzin Ling Rinpoche 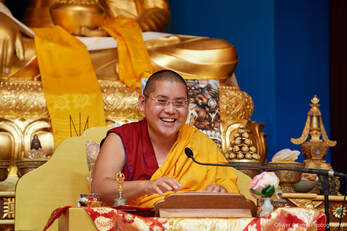 The 6th Kyabje Yongzin Ling Rinpoche was His Holiness’ main teacher and spiritual advisor throughout his lifetime, and accompanied His Holiness when he fled into exile from Tibet in 1959. His Holiness refers to him as “my Root Guru”. He was also the 97th Gaden Throne Holder - the supreme head of the Gelugpa tradition, which is the largest tradition in Tibetan Buddhism. He was the most renowned and qualified master of the 20th century and his many students included Lamas, Tulkus, and Geshes from all the traditions of Tibetan Buddhism.

Beginning with Charka the Arhat Udhay during the time of Lord Shakyamuni Buddha, twenty previous incarnations of H.H. the 6th Kyabje Yongzin Ling Rinpoche have been identified, including Tutors to His Holiness the 6th, 11th and 13th Dalai Lamas; the 48th and 75th Gaden Throne Holders; as well as kings, yogis, scholars, and lay adepts prominent in the spiritual histories of India and Tibet.

H.E. the 7th Ling Rinpoche joined Drepung Monastic University in south India in 1990, where his enrollment was celebrated with large religious ceremonies. He began his monastic studies at Drepung at the age of 10 and has since been engaged in rigorous religious study and spiritual training under the special care and guidance of His Holiness the Dalai Lama. H.E. the 7th Ling Rinpoche has recently completed all five Geshe Studies subjects (Logic, Perfection of Wisdom, Middle Way, Higher Knowledge, and Monastic Discipline) and is expected to receive his Geshe Degree from Drepung Loseling Monastic University soon.

H.E. the 7th Ling Rinpoche has traveled to several countries in Asia, Europe and the United States, as well as to many Tibetan settlements throughout India, Nepal and the Himalayan regions, where he has given teachings and talks on a variety of subjects.

H.E. the 7th Ling Rinpoche has attended many important Buddhist events, such as the World Peace Puja in Bodhgaya, India, January 2005; the International Conference on Vinaya in Sarnath, India, January 2011; the Global Buddhist Congregation in New Delhi, India, November 2011; the First Founding Members Conclave of the International Buddhist Confederation in New Delhi, India, September 2013; and is a regular attendee of the Mind and Life Conferences in India.

He has also organized and led several important Buddhist events, including His Holiness the Dalai Lama’s historic series of Jangchup Lamrim Teachings on 18 classic treatises on the Stages of the Path to Enlightenment at the three great seats of learning in south India - Sera, Drepung, Ganden Monasteries  and Tashi Lhunpo Monastery in 2012 and 2016. 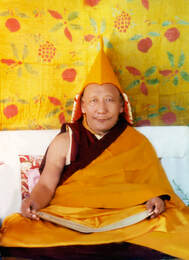 Born in Tibet, northwest of Lhasa, he was recognised as the 6th Ling Trül, became the senior tutor to the 14th Dalai Lama and the 97th Ganden Tripa The Ganden Tripa is the spiritual head of the Gelugpa Sect, the largest sect of Tibetan Buddhism. Kyabje Ling Rinpoche was the Ganden Tripa for about 14 years.