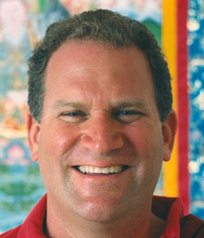 LAMA SURYA DAS is one of the foremost Western Buddhist meditation teachers and scholars, one of the main interpreters of Tibetan Buddhism in the West, and a leading spokesperson for the emerging American Buddhism. The Dalai Lama calls him "The Western Lama."

Surya has spent thirty five years studying Zen, vipassana, yoga, and Tibetan Buddhism with the great masters of Asia, including the Dalai Lama's own teachers, and has twice completed the traditional three year meditation cloistered retreat at his teacher's Tibetan monastery. He is an authorized lama (priest and spiritual master teacher) in the Nyingmapa School of Tibetan Buddhism. He is the founder of the Dzogchen Center in Cambridge, Massachusetts, and its branch centers in New York City, New Jersey, California, Portland, and Texas. Founder of the Western Buddhist Teachers Network with the Dalai Lama, he is also active in interfaith dialogue and social activism and regularly organizes its international Buddhist Teachers Conferences.

Surya Das is a sought after speaker, and teaches, lectures, and conducts retreats around the world. Lama Surya Das is a published poet, translator, and chant master (see Chants to Awaken the Buddhist Heart CD, with Stephen Halpern). He is the author of many books, including Buddha is as Buddha Does: The Ten Transformative Practices of Enlightened Living (April 2007), Awakening the Buddha Within: Tibetan Wisdom for the Western World, Awakening the Buddhist Heart: Integrating Love, Meaning and Connection into Every Part of Your Life, and Awakening to the Sacred (the three books that comprise his bestselling Awakening Trilogy, the first trilogy of Buddhism for the West). His newest books are Words of Wisdom, The Big Questions: How to Find Your Own Answers to Life's Essential Mysteries, Letting Go of the Person You Used to Be: Lessons on Change, Loss and Spiritual Transformation, Natural Radiance and Buddha Is as Buddha Does.

Surya Das is a Contributing Editor to Body and Soul magazine, writes regularly for Tricyle and other magazines, and is a founder and board member of many Buddhist monasteries, centers and charitable projects in refugee camps in Asia. He writes a regular Ask The Lama column online at Beliefnet.com and is in demand as a speaker at conferences and symposia.

Lama Surya Das presents the Buddha's ten core practices that we can all use to live a meaningful and fulfilling life in Buddha is as Buddha Does. This book offers a thorough, tried and true map to the richest treasure a human being can find. If we follow its guidelines, we will enter into a life of greater joy, clarity, peace, and wisdom than we ever thought possible. At the same time, we will be doing the best we can to change the world into a saner and more harmonious place to live. This claim can be said with authority because the core teachings in this book belong to the Buddha. In the process of awakening, the Buddha realized that each of us, deep within, is inherently perfect, whole and complete, with the capacity to overcome suffering, transform ourselves into forces for the good, and, in so doing, revolutionize and liberate the world.

Surya Das has been featured in numerous publications and major media, including ABC, CNN, MSNBC, NPR, The Boston Globe, Boston Herald, New York Post, Long Island Newsday, Long Island Business Journal, San Francisco Chronicle, Los Angeles Times, The Jewish Free Press, New Age Journal, Tricycle Magazine, Yoga Journal, The Oregonian, and has been the subject of a seven minute magazine story on CNN. One segment of the ABC-TV sitcom Dharma & Greg was based on his life ("Leonard's Return"). Surya has appeared on Politically Correct with Bill Maher and on The Colbert Report. 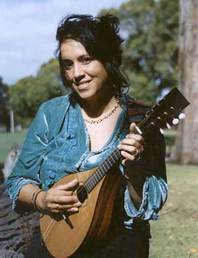 About Kavisha
Kavisha Mazzella is a musician and singer unafraid to cross musical boundaries. She sings in English and Italian,drawing on her rich Eurasian heritage making original life affirming songs with haunting melody and lyrical depth with a deep respect and affection for traditional folk roots influence.

"Her voice flows like tears of joy and sorrow, there’s a saltiness and warmth of sensuality here that sings the great bitter sweet song of life. Kavisha Mazzella may have the first and last letters of the alphabet in her name but in truth, there’s a power and presence in her stage performance which is simply beyond words."   Colum Sands

"Kavisha sings with the voice of a heartbroken angel"   Victoria Laurie, The Australian