FOR THE FIRST TIME IN MELBOURNE, WE INVITE YOU TO JOIN AMA JETSUN PEMA,  ‘MOTHER OF TIBET’ AND MR. TENPA TSERING, OUR GUEST SPEAKERS FOR AN INTIMATE CONVERSATION ABOUT THEIR EXTRAORDINARY PERSONAL JOURNEY WITH MESHEL LAURIE.

Mr Tenpa Tsering, husband of Ama Jetsun Pema, is the Representative of 14th Dalai Lama in New Delhi and member of the Tibetan Government in Exile.

Meshel Laurie is the author of 3 books, her latest, Buddhism for the Unbelievably Busy.  She works on TV and Radio, podcasts, writes columns and books, volunteers and parents 6 year old twins.

This will be an inspiring conversation with Ama Jetsun Pema and Tenpa Tsering la, and will cover topics of Tibet, the people of Tibet, the role of Tibetans in the world and no doubt will include great moments of humour.  Presented by the Tibetan Community of Australia (Victoria) Inc.

Limited seating and not to be missed! 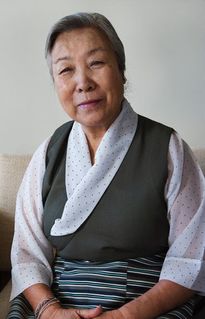 Ama Jetsun Pema was born in Lhasa, on July 7, 1940. She went to India in 1950 and studied first at St. Joseph's Convent in Kalimpong and later at Loreto Convent in Darjeeling from where she completed her Senior Cambridge in 1960.

In 1961, she went to Switzerland and then to England to do further studies. She returned to India in April 1964. At the behest of her elder brother, the 14th Dalai Lama, she became the President of the Tibetan Children's Villages, holding that position until her retirement in August 2006. She held this position for more than 42 years.

Because of her efforts, today TCV projects includes five Children's Villages with attached schools, seven Residential Schools, seven Day Schools, ten Day Care Centers, four Vocational Training Centers, four Youth Hostels, four Homes for the Elderly, and an outreach program for over 2,000 children in exile. All in all, the TCV overlooks the well-being of more than 15,000 children and youths. In 1970, at the first General Body Meeting of the Tibetan Youth Congress, Jetsun Pema was elected as its Vice President, and at the 1984 first General Body Meeting of the Tibetan Women's Association, she was elected as an Adviser. In 1980, she was sent by the Dalai Lama to visit Tibet as the leader of the third Fact Finding Delegation and for three months traveled extensively all over the country. Jetsun Pema is also the Governing Body member of the Tibet House in New Delhi and the His Holiness the Dalai Lama Charitable Trust.

In May 1990, the Dalai Lama convened a special Congress of the Tibetan People-In-Exile in Dharamshala to elect the Kalons (Ministers) of Central Tibetan Administration. Jetsun Pema was one of the three Ministers elected and became the first Tibetan Woman Minister.

In 1991, she was again elected by the Assembly of Tibetan People's Deputies (Tibetan Parliament) as one of the Ministers and was allocated the portfolio of Minister-In-Charge of the Department of Tibetan Education. In July 1993, she resigned from the Kashag (Cabinet) and is today the President of the Tibetan Children's Villages. In 1995, the Assembly of Tibetan People's Deputies awarded her the title, "Mother of Tibet," in recognition of her dedication and service to Tibetan children. Jetsun Pema has traveled widely to speak about the Tibetans and her work at the Tibetan Children's Villages.

She was awarded the UNESCO medal in 1999.

She wrote an autobiography in 1996, called Tibet: My Story. In the 1997 movie Seven Years in Tibet, starring Brad Pitt and David Thewlis, a film based on the book by Heinrich Harrer, Jetsun Pema portrayed her real-life mother in the film as the mother of the young 14th Dalai Lama.

​Meshel Laurie is an author, comedian and broadcaster, currently appearing regularly on The Project on Network 10, writing for The Age and The Sydney Morning Herald and producing some of Australia’s most listened to podcasts.

Meshel’s most recent book, “Buddhism for the Unbelievably Busy” has been translated into 8 languages and lead to a successful promotional trip to London in 2018.
​
​Her earlier book, Buddhism for Breakups was a best seller and she’s currently writing her third book, in which she again explores the value of the ancient wisdom of Buddhism in our modern lives.